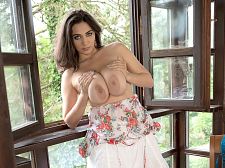 Busty and beautiful Alexya shows off her gorgeous body by a window, and when all her clothing is discarded, smears yogurt all over her big tits. Some of it drips down her chest. She looks good enough to lick.

Alexya told us about one of her sexual experiences that she thought was very kinky. “I was dating a very sexual and masculine man,” said Alexya. “After six months, he wanted me to dominate him and slap him on the face.

“Another time, I was at the cinema. The hall was almost full but there was a row of seats that were empty. The movie was 3D and the people were wearing glasses. I was alone and I started to touch myself slowly. After a while, a man next to me saw me and he watched me touch myself until I had an orgasm.”

See More of Alexya at SCORELAND.COM!