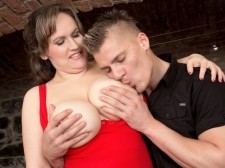 Ever-smilin’ Olarita‘s big, buckin’ boobs are ready for a porn-cock between them and a load of nut sauce over them. Her new friend Novis pulls her knockers out of her strappy, low-cut dress and sucks and pinches Olarita’s thick nips. They each take a breast and lick a nipple at the same time. All this while, Olarita is jacking his dangling sausage. What a multi-tasker she is.

Still dressed with her tits out, Olarita takes his big boy and sticks it between her twin mounds of naturalness. She opens her mouth and in goes his sausage for her to lick and suck. Olarita stands up and turns around so he can inspect her meaty ass-cheeks. She pulls one cheek so he can see her spread pussy and butthole. In an unusual move, his cock slides under her panty string. He wants to see more and spreads Olarita’s cheeks apart for a better inspection, sticks his fingers in deep and smacks Olarita’s ass with loud spanks.