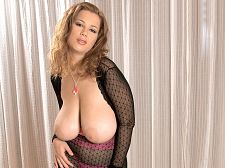 We’ve got a Terry Nova titty treat! Whatta babe. Two babes in one! We’ve seen Terry dressed like a college girl in her July ’08 SCORE photos and spreading her legs for entry by a dick slinger. Our man is back in Prague once again, phoning for the hottest babe around. Who’s he gonna call? You’re damned right. Terry Nova! Terry’s never too busy for us. She shows up at the house looking like a billion Czech Crowns. Terry’s dressed like a streetwalking hooker, ready, willing and able to ride the pole of love. Where did she find this outfit? She comes over in a two-piece skintight top and bikini bottoms under a black lace micro-dress that shows most of her butt-cheeks. It looks like we’re going to get a very hot fuck on the couch and Terry’s ready now for cock in her ass.