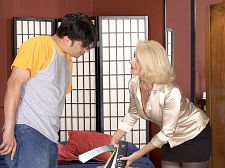 In a blast from the past, the great Georgette Parks sucks and fucks a young cock in what was her first hardcore scene ever. We first laid eyes on Georgette in 2003.

“I remember sitting in the archive room with SCORE Group chief John Fox, reviewing sets at the end of the day, when we came across a photo set of Georgette that an outside photographer had sent in,” recalled 60PlusMILFs.com editor Dave. “At the time, we were still assessing the market for mature women. There were no such things as 50PlusMILFs.com and 60PlusMILFs.com. We suspected that a lot of our members felt, ‘The older the better,’ but we weren’t sure. When we looked at Georgette, we thought, ‘She’s a very beautiful, very sexy woman, but is she too old?’ We ended up buying the set as a way of answering that question, and the rest is history.”

Georgette was an instant hit. The next time we shot her was in our studio on July 14, 2005, when this scene with Anthony Rosano was shot. A swinger in real life who enjoyed being watched while having sex, Georgette was a natural. The setting for this scene was also a natural because Georgette was, indeed, an interior decorator.

“I’m living in a clothing-optional community in Florida,” Georgette told us. “It’s a really nice resort. People jog and ride their bikes naked. They play tennis naked. When I’m at the house, I’m naked, but if I’m going to go out, I have to put clothes on to go out of the gates. If I walk around the neighborhood, I’m naked or I just put on a little wrap, and that’s it. And when you go to dinner or the nightclub, we basically dress in clothes, but usually sexy clothes and they come off pretty quickly!”

Georgette became the first mature model in our history to have an entire movie devoted to her, Sexxxty Something. In addition to her photos and videos, she penned a regular column in 40Something magazine, also called “SeXXXty Something,” in which she chronicled her swinging adventures. Golden years stardom was something she’d never envisioned.

“It’s funny, but I have had others ask me about being in 40Something and been shocked that they found me,” she said. “I have been at the mall or grocery store and seen guys stare at me and smile. I’ve always wondered if it’s because they recognize me from the web or magazine or if they are just flirting with me. I had another guy tell me he’s a big fan of mine.”

This is the only Georgette scene in the TSG archive that has never before been presented on 60PlusMILFs.com. Enjoy!