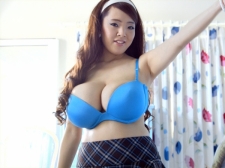 There is no thing lost in translation, no language barrier, with Hitomi. This babe doesn’t need her high tech English-Japanese smartphone app. All she has to do is smile and do her thing. This time, Hitomi is a hawt honey bunny coed hitting her enchanting spot in private after school and getting her homework done love a nice little schoolgirl.

See More of Hitomi at SCORELAND.COM!