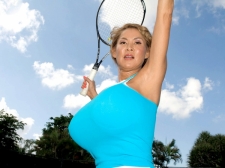 October 2014 SCORE magazine (on-sale July 8th, 2014) will mark Twenty years since Minka’s launch in October 1994 issue. That in itself in the world of big-bust modeling is a major achievement when so many models come and go.

In advance of becoming a dancer and model, Minka was a ranked tennis player, smth that remains her excitement to today.

“One day, I was playing in the Oriental Olympic Games in Chicago, and my friend, she’s a plastic surgeon, that babe and I were showering together and this babe said to me, ‘Why don’t u acquire into the men’s magazines? Do not educate tennis. How much money can u make teaching tennis?’

“I didn’t even know about the magazines. I had not at any time seen them. So this babe brought SCORE mag tomorrow, and this babe said she’d not at all observed any cover of SCORE with an Oriental goddess. This babe said, ‘You have a photogenic face. You are plan to make it.’ When my friend showed me the mag, I saw the telephone number and that is what I called. I sent 3 Polaroid pix. In all the pictures, I had a natural smile on my face. And it was intend to be the first time an Oriental beauty was on the cover. That was very important to me.”

Minka was in fact the first Asian glamour model to become a covergirl in the big-bust magazine category.

“So John Graham got the pix, then this petticoat chaser called my abode. He said, ‘An airplane ticket is going to be at your house in one or two days. I desire u to come to UK.’ That’s it. So I went to UK. And that man took a test picture and said I would be on the cover, and then he told that I would be a feature dancer. I followed what Lisa Lipps and Casey James were doing. I did not know how to dance that way. I did not know how to sing. I didn’t know how to take off the hot clothing. But I knew how to smile, and I learned what to do.”

“I knew I could do it, but tons of angels back then were stuck up. They didn’t talk to me. And I thought, ‘Wait.’ And now, everybody’s gone, and I’m here! And I am gonna be here next year!”

Watch More of Minka at SCORELAND.COM!