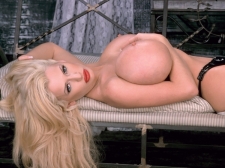 Back in the 1990s, when SCORE was in its infancy, you could have asked any big boobed lover to name the one goddess most-associated with the magazine and the answer u would have received is “SaRenna Lee.” Not Chloe Vevrier. Not Linsey Dawn McKenzie. SaRenna Lee. The goddess who epitomized the mega-slim ‘n’ stacked glamour cutie of that period. The gal who’s so attractive that her December ’93 cover (her “Marilyn Monroe” cover) continues to be the one-and-only face-only cover in SCORE history. The hotty who was our hands-down choice to grace the cover of the 10th anniversary issue (June 2002).

The angel who finished 20th in our “20 for 20” voting of SCORELAND members.

Times have changed. If this voting had taken place 10 years ago, chances are SaRenna would have finished in the top three. But naturally-stacked hotties have taken over the big breasted world. And, sometimes, people have short memories. ‘cuz few gals have meant as much to SCORE as SaRenna.

This babe graced the cover of SCORE six times. She sailed on the 1995, 1997 and 1998 Boob Cruises and was, according to many passengers, the main reason they signed on. She made Twenty one appearances in SCORE during a career that spanned 2 decades and culminated with her induction into the SCORE Big busted Hall of Fame. Her face and body…stunning. Wondrous.

And, even though that babe finished 20th in “20 for 20,” in a way, this babe remains No. 1. We’ll spare you the suspense and let you know that SaRenna is the only mega-slim ‘n’ stacked showgirl from the ’90s who cracked the Top 20. No Tiffany Towers. No Traci Topps. No Angelique or Minka. Does this mean the other Nineteen girls in our “20 for 20” are more killer than these classic ladies? No. It means times have changed. But SaRenna‘s presence at No. Twenty proves this babe still has a put in the hearts, minds and hard-ons of many busty paramours.