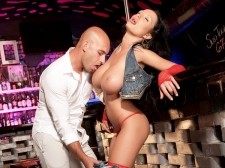 Patty Michova has the moves. She moves in mysterious ways. She knows the pole tricks on-stage and off-stage. Patty was shaking them at a small club one afternoon when Neeo walked in to have a drink and watch some fine tit-bouncing moves by a hot girl. The place was empty. Even the bartender had stepped out for a few.

Neeo eyed the new girl and she eyed him as she danced in front of him. He had no competition to divert her interest. No other guys waving money to steal the connection. Patty danced only for him. She peeled off her outfit to reveal more of her sleek, slim-and-stacked body.

The cave-like atmosphere of this empty club adds to the sexual electricity. It’s a great place to fuck. Neeo reaches out to suck Patty’s tits. To lick them. Kiss them. She gets on her back on the stage and opens her legs for Neeo’s tongue. He eats out Patty’s pussy, squeezing her tits. He finger-bangs the busty brunette then pulls down his pants to extract his cock and feed it to her. She grabs it to jack and blow with an experienced, cock-hungry mouth. The steel pole comes in real handy for fucking and sucking.