Veronica Vaughn is a Mother, and Vikki is her daughter! 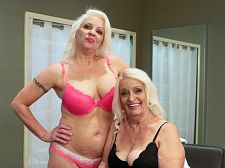 Now for something absolutely different, meet Vikki and Veronica Vaughn.

No, they’re not sisters.

And they both banged the same lady-killer! On the same day!

Okay, see the interview. This keeps getting better.